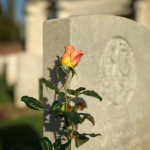 Edgar was born in about 1888 at Beggarington, Queensbury, the census 1911 records him living with his mother Grace and his two brothers and three sisters at 1 Elder Bank, Roper Lane, Ambler Thorn.  Edgar was a plasterer by trade and in October 1915 he married Hannah at All Souls Church, Boothtown.  They lived at 19 Brewery Street, Boothtown and this address is shown on his service records.

Enlisting on 20th June 1916, Edgar was mobilized on 10th August 1916 and after training arrived in France on 2nd December 1916 where he joined the 9th Battalion, Duke of Wellington’s (West Riding Regiment).

He was wounded on the 28th April 1917 and having passed through the medical chain arrived at Southwark hospital, East Dulwich on 4th May 1917, his wounds are shown as GSW (gunshot) to left upper and lower extremities, on the notes page very serious wound is written.  Edger died on 7th May 1917 and is buried at Haley Hill Cemetery, Boothtown.